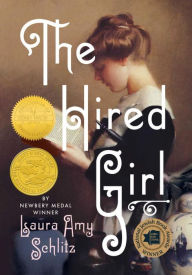 Worked to the bone and neglected by her father and brothers, fourteen year-old Joan decides to run away from home and finds herself in Baltimore, where she is taken in by a wealthy Jewish family and hired on as a servant (under the assumed name of "Janet").  Raised in a poor farm community, Joan has no knowledge of Judaism, but learns a lot about it during her employ.  At the same time, she explores her own Catholic convictions.  The experience of her new work also introduces her to themes of loyalty, respect, and love in this lively, well-researched, and ultimately uplifting story of the search for human dignity.

The result is an utterly captivating story that presents an unusual heroine who is both tempestuous and intelligent, but also sensitive and fragile.  In depicting her as such, Schlitz captures the volatile world of a fourteen year-old who is curious and motivated, yet still prone to romantic fancies and fantasies.  Joan/Janet is strong willed and driven, but utterly prone to bad choices and impetuous behavior in a way that is hard not to love.

But most of all, I loved the story of Janet's search for self.  This is taken on all levels as she searches for love, respect, dignity, and faith.  In particular, her moment of transcendence as she experiences the Divine (on pp 352-353) is worthy of the greatest religious thinkers and is a stunning appearance in the context of a novel written for teens.

This is an ambitious work that stretches the traditional boundaries of Young Adult literature.  That the novel is also a respectful treatment of American Judaism and a well-researched piece of historical fiction is an added plus.
Posted by Paul at 7:50 PM