Girl Mans Up, by M-E Girard 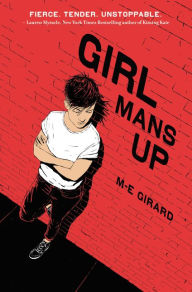 Pen is just one of the guys.  She's seriously into badass videogaming and doesn't take crap from anyone.  But it doesn't mean that the world gives her any respect.  Her neighbor Colby accepts her as a friend but never fully as part of his gang.  Instead, he demands that she "man" up by following his wishes. This puts her in line as she attempts a failing battle to prove she isn't acting "like a girl."

Meanwhile, her parents (first-generation immigrants) use their own variant of the approach.  They see her rejection of femininity as a threat to Pen's future (which they have narrowly defined as getting married and going to nursing school).  The gaming, hanging out with boys, dressing androgynously, and behaving like a "punk druggy" seems destined for disaster.

Only her older brother (who has lots of problems of his own) and Blake (a girl who seems to be just as much in love with gaming as she is) seem to get her.  Pen wants desperately to make some moves on Blake, but the possibility of a relationship between them is threatening to both Colby and her parents, leading to conflict and ultimately the need for Pen to assert herself and her right to be treated with respect.

It's a provocative book title for a tough heroine who tries to challenge gender stereotypes, but who ultimately reinforces them.  But it's got a lot of originality.  Let's face it:  a lot of heroines in lesbian teen lit are femmes.  After all, it tends to fit more with the angsty profile of books marketed for girls.  Pen, as an uncompromisingly butch young woman, is thus a uniquely non-conforming lesbian character.

However, in her effort to resist being portrayed as weak, Pen makes some pretty horrid choices.  The culture she values (which she has identified as not just tough but also manly) is a dead-end, loser ideology.  The constant posturing and trash talk, as realistic as it may be, just grated on me.  As epitomized through Colby and his narcissism, this masculinity is hardly anything for a boy (let alone a girl) to aspire to.  And while she manages to moves on slightly from it in the end, it is still clear that she equates femininity with weakness. Pen's lack of success in solidly moving beyond both masculine and feminine stereotypes frustrated me.
Posted by Paul at 10:25 AM