Symptoms of Being Human, by Jeff Garvin 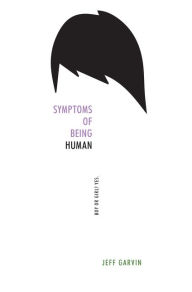 Riley suffers from anxiety and depression.  Uncomfortable with being forced to dress up and appear at Dad's political events, Riley makes the connection between that discomfort and the anxiety while reading about gender fluidity.  The revelation helps Riley understand how a day can start feeling girly, but then suddenly turn masculine.  While learning this is a source of great comfort, it doesn't get Riley any closer to coming to terms.  Openly discussing the condition seems insurmountably difficult, and the pressure of keeping the condition secret makes the anxiety worse.

As a coping mechanism, Riley's psychiatrist suggests creating a journal, which Riley decides to create online as an anonymous blog.  The blog takes off and goes viral.  But as it garners attention, the anonymous cover is blown and Riley is outed, placing the entire family in jeopardy.

I'm not actually aware of any other mainstream YA book at this time that contains a gender-fluid protagonist.  Garvin seems quite aware of the book's uniqueness and can grow preachy at times (falling into the trap of force feeding us facts and statistics about gender-fluidity).  That gets boring, but is understandable in a pioneering book.

But what I really liked about this novel (aside from generally being well-written) is the literary exercise of escaping from ever indicating a gender for Riley.  It's remarkably difficult and (unlike my feeble attempt above to avoid using a pronoun in summarizing the story) Garvin pulls it off without growing awkward.  This turns out to be quite subversive: I found myself trying to figure out "which one" Riley is and growing frustrated that I could not.  That in turn threw the whole issue back in my face:  why was I so obsessed with classifying Riley?
Posted by Paul at 7:15 AM