All in Pieces, by Suzanne Young 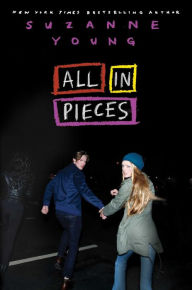 When Savannah's (ex-)boyfriend calls her little brother a "retard," she impales his hand with a pencil and gets sent to an alternative school.  That same fierce reaction drives her to expend any effort to take care of her little brother, who her alcoholic father has long since written off.  It's a losing battle.  Savannah's almost a child herself and juggling school, her brother, her friends' various issues, and her disintegrating life is too much.  But into that world strides Cameron, a boy with a silver spoon in his mouth and a burning desire to break through Savannah's hard exterior, with perhaps enough persistence to outlast her.

A love story in a terribly depressing setting.  One bad thing after another happens to Savannah.  At first, it annoyed me that so many of her tragedy's were self-inflicted (or at least made worse) by her unwillingness to seek or accept help.  After a while, I began to understand how central her pride was to her ability to survive.  But in the end, when she throws away that pride as well, I returned to my disgust with her ego and her arrogance.  We're told in the last chapter that she fixed up her life by accepting the help she had rejected throughout the novel, all of which seemed like a cop out.  It was, in fact, that story of learning humility, finding inner peace, and learning to trust that was the interesting part of the story...but it simply wasn't there.  It all happened off stage!

So, if you want to read a story about a girl that hits rock bottom and then -- after a big flash forward -- fixes her life, this would be a good story for you.
Posted by Paul at 7:53 PM