Asking for It, by Louise O'Neill 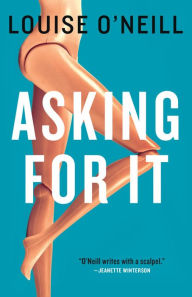 Emma is beautiful and tough.  Her girlfriends have her back and with boys she’s fearless.  So, as the summer begins, Emma is on the prowl.  She knows the guy she wants and she’ll be certain to have him.

But after a night of which she has no memory, she is found bleeding and beaten on the porch of her home.  Shortly afterwards, the pictures start to appear on the Internet.  Her instinct is to put up a tough front and claim that it is all good.  But when Emma realizes that her nightmare isn’t going to go away, she is convinced to accuse her attackers.  In doing so she learns a hard truth:  things will only get worse.

It's an indictment of public attitudes towards rape (set in more conservative Ireland but not much different from the States).  And O’Neill sets up a difficult scenario, making Emma reckless, promiscuous, and unreliable, but sticking nonetheless to the narrative that no one “asks” to be raped.  I’d like to believe that even as flawed as person as Emma would be believed by the reader, but the story is ambiguous enough that I could see some readers doubting her version of what happened.

As a story (rather than as a polemic), it’s a drab, depressing read, with a very ambivalent (albeit authentic) ending.  That makes the story a difficult read.  But O’Neill has a good feeling for dialog and for characters.  The various players felt quite real and vivid, regardless of age or background.
Posted by Paul at 1:02 PM