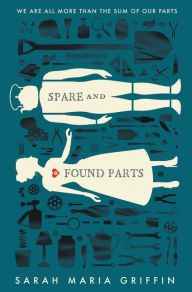 In a post-apocalyptic world, destroyed when the world became so overrun with the lust for data that people no longer spoke to each other, technology is both worshiped and feared.  Since the Turn, three rules now hold sway:

Nell is the pride of her father's Contribution: part human girl, part machine.  It is her father's prosthetics and machinery that allow her to live.  And in the world after the Turn, where people are frequently born without all of their parts, his particular technology is tolerated.  Still, she is shunned and feared.

In addition to her loneliness, Nell is under pressure to make her own Contribution (alternatively, she could join her Nan and her followers in the Pasture to pray against technology but this holds no appeal).  But until she comes across a mannequin boy's hand one day, she doesn't know what she can do.  Now she does:  she will build a companion, a friend, someone she can talk to, someone who isn't afraid of her machine parts.  But her contribution will offer much more to the world than Nell can even imagine!

A moody and often hard-to-track story that owes some gratitude to Mary Shelley, but seems just as inspired by Johnny Mnemonic and cyberpunk.  The result is original and very very strange.  When your heroine's life-altering kiss is delivered by an android with a tea pot for its head, you know you aren't dealing with typical YA tropes!

It is so rare (and so special) to find an author of science fiction with something to say and an original way to say it.  And it doesn't hurt that she's a good writer!  The writing is fluid and oft times quite beautiful and the characters strong and vibrant -- all of which makes the weirdness of the settings and events all the more strange.  Beautiful and haunting!
Posted by Paul at 3:03 PM