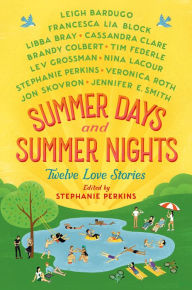 Summer.  Long days.  No school.  Lots of time to explore new friendships.  Beaches.  Summer camps.  Plenty of decent material to utilize in writing a short story, right?  So, what do you get when you ask twelve YA writers to attack the subject?  Sea monsters, carnival demons, funiculars, and time paradoxes!  That's because Perkins’s anthology is the weirdest collection of summer romance stories ever!  Highlights include Francesca Lia Black’s nostalgic look at romance in the early 80s (a favorite for personal reasons, but one which will probably just seem quaint to the young whippersnappers!), Jon Skovron’s comedy of manners and riff on Jane Austen, Lev Grossman’s tip of the hat to Groundhog Day, and Perkins’s own story of love lost and rediscovered on the highest mountain east of the Mississippi.

In between, there are a bunch of largely forgettable pieces and more than a few (that I’d just as soon skip) going for the gore factor.  The overall challenge that each author faced (to mixed levels of success) was developing a character that was engaging and meaningful in just thirty pages.  Creating a story that was worth reading and had something to say in that short space was also a trial.  I found this collection a mixed bag.
Posted by Paul at 11:16 AM