The Boomerang Effect, by Gordon Jack 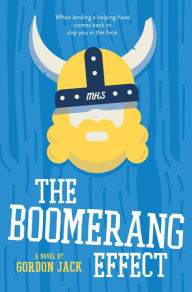 Lawrence lives in the crosshairs of his principal.  And to escape from potential deportation to an alternative school (or a military academy), Lawrence agrees to mentor a young foreign student from Norway named Spencer.  Seeing how socially awkward Spencer is, Lawrence has his work cut out for him.  But even if he succeeds in making Spencer socially acceptable, it seems unlikely that this small piece of good will can help rescue Lawrence.  That's because of the Boomerang Effect:  no good deed goes unpunished.

There's a vandal disguised in the school's mascot viking costume, going around and destroying Homecoming, and everyone assumes it's Lawrence who's the culprit.  But with some help from some LARPers, a wise squirrel guide, and Spencer, Lawrence will fight ninjas, climb towers, and tussle with rabid chickens to clear his name.

Every male YA author seems to wants to be John Green these days, or at least have his wit.  This usually gets manifested through snarky (and sometimes crude) writing. In Jack's case, he adds a quirky sense of the world through creating a very busy story.  In addition to the squirrels and chickens, there's Lawrence's oddball parents, his inarticulate best friend, Spencer and his possible autism, pot smoking, Lawrence's origami hobby, and numerous other characters.  Some of these matter and some just serve to entertain or distract.  Among the most interesting threads is Lawrence's inability to be comfortable in his own skin, but this is maddeningly underdeveloped.  Amidst this chaos, the story itself struggles to emerge.
Posted by Paul at 9:36 AM