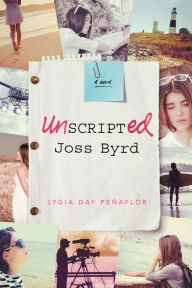 Joss Byrd is the hottest young actress in America, but she can't help but feel like that she's a fake.  She's got talent, but she struggles to even read her scripts.  And as much as she owes her success to her mother's drive, she also fears her Mom's penchant for sabotaging her successes.  During a shoot of a movie in Montauk, Joss faces some hard cold realities about the movie business, including the cost of fame and success.

Told with sensitivity and insight by a woman who actually works in the film business as a tutor for child actors, the novel exposes an entire world that few of us know much about (even if we think we know the people so well!).  But the characters themselves are hard to relate with.  From her experiences, Joss has to be wise beyond her years and Penaflor does a decent job of capturing that, but it's hard to connect with her.  The relationships around her are also naturally superficial.

Lacking much in characters, what we really have is the story and that tends to drift from idea to idea.  The story is full of unresolved issues (the director's infidelities, the relationship with the director's sister, her mother's exploitation of Joss and the jealousy she feels for Joss's success, and Joss's feelings for her co-star) that largely just fade away.  The wrap of the film (and the story) comes so suddenly that I didn't even realize it was over until we were told that it was.

On the separate subject of marketing this story, there are different challenges.  The thematic material is probably a bit mature for a middle reader, but since Joss is per-pubescent, it's unlike that young adult readers will be interested in her.  The ideal reader would be a ten year-old with a good foundation!  And finally, what's with the cover? Couldn't they have picked a younger model?  The one depicted is obviously too old to be Joss!
Posted by Paul at 2:39 PM