A Tragic Kind of Wonderful, by Eric Lindstrom 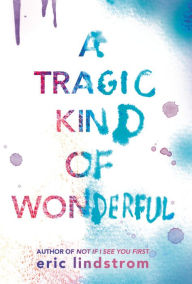 Mel struggles with bipolar disorder (a condition that runs in her family) and while her parents and her aunt recognize the symptoms, Mel keeps her friends largely in the dark.  So when her erratic behavior is misunderstood, her friends assume the worst and lash out.  Their response sends Mel into a spiral and triggers a breakdown.  The entire experience is told through Mel's eyes, so the reader is sent through a a frantic journey in Mel's psyche, documented by her in a journal that tracks self-check-ins of her emotional state.

In all, a well-thought-out exploration of bipolar disorder that allows us to experience what that must feel like.  For a rational person, that can make for tough reading as Mel behaves so erratically.  Lindstrom probably could have had a lot of fun making her an unreliable narrator as well, but he never falls for the temptation.  Instead, Mel's storytelling is remarkably lucid.

As a story, it's a fairly modest endeavor without much going on beyond a mental breakdown and some fairly unremarkable supporting characters -- the strength is really in the character-building of Mel.
Posted by Paul at 11:19 AM