Learning to Swear in America, by Katie Kennedy 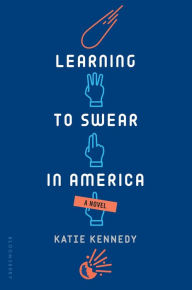 An asteroid is hurtling towards Earth, with the potential to cause serious damage, perhaps even exterminate the planet.  A group of American scientists working on the problem are about to have their ranks augmented by a young Russian whiz kid named Yuri.  Yuri's a brilliant specialist in anti-matter and all of seventeen years old.  He holds a doctorate and possesses all sorts of talents, but has never kissed a girl.

Enter a girl (Dovie) and her handicapped brother (Lennon) who cross paths with Yuri by chance.  And suddenly, while the fate of the Earth hangs in the balance, Yuri finds time to sneak into Dovie's classes at her high school and even to take her to the prom!  All very cute and excruciatingly silly.  This is pretty much the tone of the book:  world crisis as seen through the alleged lens of an adolescent. In any case, you needn't worry your head about the science or even the Russian.  But yes, there's is some of the promised profanity in the book.

It's not a bad adventure, but the romantic angle doesn't click as well as it should (strikingly, Yuri's friendship with the little brother Lennon is actually much more fun).  The reason with the lack of fizz is easy enough to identify:  none of the characters really seemed that interesting.  Meanwhile, the ridiculousness of the situation was distracting for me.  It was a book that simply can't be taken too seriously:  a fluffy beach book, without the beach.
Posted by Paul at 12:11 PM