Still Life With Tornado, by A. S. King 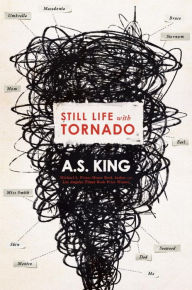 After experiencing a trauma in her art class, sixteen year-old Sarah decides to stop attending school.  She spends her day following a homeless artist around the streets of Philadelphia and hanging out in an abandoned former school building.  School is "unoriginal" and "nothing very happens there" but, in Sarah's world, lots of things are happening.  She's accompanied in her journey by her ten year-old self, her twenty-three year-old self, and even a forty year-old incarnation.  At first, she assumes that these manifestations are hallucinations, but others can see them.  Each Sarah has a role to play in calming the tornado that is Sarah's life.

The novel is also a story of Sarah's damaged family:  her abusive father, wounded mother, and exiled older brother.  They and Sarah come to rely on the wisdom that comes out of Sarah's "existential crisis."

My initial inclination was to discard this unusual and strange book, but I grew to like it more as it moved along.  While still prone to more navel gazing than necessary, I enjoyed the unusual character of Sarah (in all four of her forms). For me, the strong role played by Sarah's abused mother threatened to push the story out of the YA genre, but it ultimately fills out the details in a way that Sarah herself could never have done plausibly.  Dad and brother are less satisfying characters, but still believable.

The other notable feature of the story is the central focus on place.  The action is set largely in Philadelphia and Cancun, and both are described vividly, with a loving eye from a good observer.  Whether it's the claustrophobia of a Philly row house or the algae-infested Gulf off of the resort where Sarah's family stays, the settings resonate and play an active role in the story.  The overall result is a novel about abuse and recovery and manages largely to avoid actual depictions of either.
Posted by Paul at 4:32 PM