The Haters, by Jesse Andrews 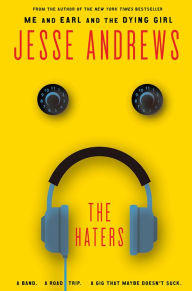 That they can't really play isn't as important as getting their chops giving it a try.  And that they can't find a place to place (even when Ash tries to offer the venues money to let them play) is just a complication.  Persistence, dumb luck, and some close calls follow them on an exodus from Western Pennsylvania to New Orleans.

It's a boy book with a lot of spot-on language (i.e., the two boys spend a lot of time talking about their penises).  That can get really old fast, but Andrews seems to have the sense to pull back before it goes too far.  He also has the good sense to not try to do much with Ash's character (except to make her parrot the boys' crudeness).  That works, but leaves her a bit of a cipher.  What the story has in spades is humor and from the situations themselves (which are often scary freaky, but recalled with such levity that you can't help but chuckle) to the amazing snarky observations about music and musicians, there's a lot to enjoy in the book.
Posted by Paul at 12:28 PM