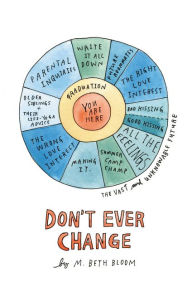 Eva wants to be a writer and she's well-regarded by her teacher, but he wants her to stick to things she knows about.  She doesn't agree:  it's not like she has a lot of life experience to draw upon!  He also points out that she might do better learning to be kinder to her fellow classmates during their peer reviews.

Partly to follow his advice, she branches out during the summer between high school and college, to attempt to broaden her experience.  While counseling at a summer day camp, she inspires a group of girls to write, and learns some lessons standing up for a bullied child. In this mix, she juggles two relationships and repairs her broken friendships.

Bloom has a very unique style.  The story is rooted in fairly floral prose, but the dialogue is snappy and colloquial, creating a clash of styles.  Add to this that the settings are a little unusual (for example, Eva meets her first romantic interest while they are sharing the bathroom).  I thought the novel was  choppy (very nice scenes were sometimes just dropped into the story, not so much because they added to the story, but seemingly simply because they were nice scenes) and often hard to follow.  I suspect that the story might have a bigger pay off with greater attention or a second read, but I generally don't like to work that hard with a book.
Posted by Paul at 3:06 PM