Tell Us Something True, by Dana Reinhardt 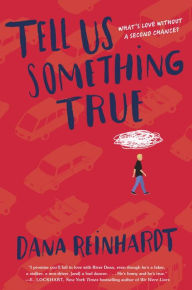 River has made it through life by drifting along and relying on others to tell him what to do.  When his girlfriend dumps him (in the middle of Echo Park Lake) he has no clue how to get back home.  He’s the only person over sixteen in LA who doesn’t drive (and he doesn’t know how to use mass transit either)!  As with his life, he’s expected others to help him get around.

So, he walks home.  Along the way, he discovers a support group for troubled teens.  While his problem is a broken heart, the group just feels right to him.  And so he invents a story of addiction to explain his pain, and the group takes him in.  But River’s problems are of a different sort than theirs.  And he finds his lie a barrier to appreciating the intimacy that the group has to offer.

A brief and breezy new novel by Reinhardt.  She can be an uneven writer, but this is one of the better ones, with good character development and a moderately interesting story.  The developments are firmly pre-ordained but not drawn out and the pace brisk enough that we don’t mind taking the trip.  One thing I will certainly give her credit for is her ability to create realistic male characters who are not all snarky and crude.
Posted by Paul at 11:23 AM