The Truth of Right Now, by Kara Lee Corthron 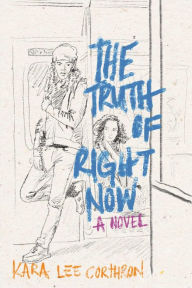 Lily is recovering from the scandal surrounding her affair with a teacher last year, and shame and embarrassment separate her from her peers.  Dari is a new kid and one of the few African American students at the school.  This would be more than enough to make him an outcast, but his attitude and anger make it harder for him to ingratiate himself.

The two of them fall for each other.  But their bond is threatened by Dari’s abusive father, kids at school, and the institutionalized racism around them.  A tragic ending, worthy of Shakespeare, culminates a story which is strikingly authentic and true to its characters.

Corthron is a refreshing new voice in YA literature.  Her ability to revisit tropes and eke modernized truth out of them is breathtaking.  And the characters are amazing.  In a short span of pages, she is able to fill out both her major and supporting characters with great depth.  Of the majors, Dari is the most sympathetic but both him and Lily are full of good and bad traits, prone to real faults and failures.  They feel real in a fresh way.  Now, Corthron has an agenda about police violence, but she approaches it with a light touch and integrates it into her overall themes of honesty, change, and coming to terms with who we are.  In all, I think this is an outstanding novel and one of the best I've read in a long time.
Posted by Paul at 2:45 PM