10 Things I Can See From Here, by Carrie Mac 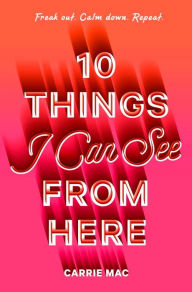 People are always telling Maeve to “not stress things,” “relax,” “let it go,” and so on (she’s heard it all before!), but it never helps.  Since she was little, she’s always been worried.  And those worries have blossomed into full-blown panic attacks that leave her paralyzed.  Some tricks she’s developed (like sketching) can help her cope, but most of all, being home with her Mom does best.  So, things can’t be good when Mom decides to spend six months in Haiti and sends Maeve to live with her father.

Not that things there are going all that well anyway.  Her stepmom is expecting a new baby and insists (to Maeve’s panicked horror) that the baby needs to be born at home.  Dad is freaking out about becoming a Dad again and simultaneously falling off the wagon.  And Maeve misses her mother.  But there’s a ray of hope in the form of a girl named Salix, who’s a virtuoso on the violin, hot for Maeve, and a spirited positive counterpoint to Maeve’s doom and gloom.  While total opposites, the two girls hit it off in an awkward, but ultimately endearing relationship.  And somehow, everyone comes together in the end to sort out a multitude of misfit behaviors.

It’s nice to see LGBT literature become common enough that we can tackle other issues and not make the protagonist’s sexual orientation the sole issue.  Maeve’s panic disorders can be quite amusing (to an outsider), but I liked Mac’s sympathetic portrayal of how much she struggles with them.  And it provided a great dramatic device.

There were a few random subplots (drug abuse, relationship violence, Mom’s woes in Haiti, Salix’s musical career) that I’m not sure added much to the overall story, but in general I liked the storytelling, mixing in of local color, the nice family dynamic, the presence of mature adults and realistically awkward teens, and the fun friendly neighbors.
Posted by Paul at 3:12 PM