Our Own Private Universe, by Robin Talley 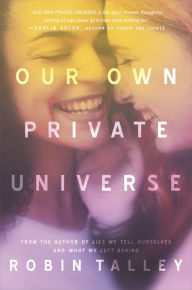 When Aki and her best friend Lori go to Mexico to do a church-sponsored service project, they make a pact that this is the summer they will both hook up with someone.  But what Aki doesn't count on is that her partner would be Claudia, a girl from another church group. While she's considered herself bisexual, she's never given it much thought and the intensity of her feelings for another girl take her by surprise.

Neither Aki nor Claudia are ready to come out to their peers or to the adults (Aki's father is a pastor and Claudia's folks are wildly homophobic), so they sneak around, which only makes their longings more intense.  However, someone will eventually find out and, in any case, the trip will come to an end and the summer soon be over.  Neither girl wants to imagine what separating will be like, but to keep their relationship going, they will need to go public.

Meanwhile, Aki is discovering broader interests in her church's politics and the world.  Along with a boy in the group (for whom she occasionally also finds some attraction), she tries to interest her peers in various social issues, including helping the people of the village where they are working find better medical care.

Harlequin Teen continues to surprise me, publishing a line of very sophisticated and edgy YA books.  This one is quite steamy (more in keeping with the stereotype about their adult line), but it is far from formulaic and it probes interesting territory.  Aki is a rare beast in mainstream literature -- a young bi-sexual of color who is a devout Christian (there's all sorts of topic here that is actually never explored, as Talley has more interesting things to do in this novel).  Her father is a conservative African American minister (not a demographic known for its celebration of queer lifestyles) who surprises us by not becoming an antagonist.

Talley's explicit but largely matter-of-fact lesbian sex scenes will raise a few eyebrows, but mostly for the endearing way she depicts the very realistic clumsiness of young lovers (although I found her inclusion of a discussion of safe sex to be clumsy in a not-so-good way).  I think the novel's detailed and honest depiction of two young women in love in a frank, but non-exploitative way, is a milestone.

I was less taken by Talley's reliance upon deception and deceit to move the story along.  Resolving most of the struggles and conflicts by simply having the antagonist reverse themselves by admitting that they were lying is a cheap trick.  Done once or twice, it would have been fine, but most of the resolution of the story relies upon admitting that there was never a problem in the first place.
Posted by Paul at 10:24 AM