By Your Side, by Kasie West 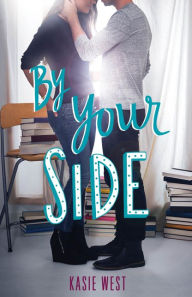 On the night of the party where Autumn is finally going to get together with Jeff, she finds herself accidentally locked in the library.  Apparently this library has no panic doors or an alternative means to get out, so she is well and truly locked in. Worse, it's a holiday weekend and the place is going to be closed for the next three days.

She is not alone.  A boy named Dax from her school has snuck in to spend the night there.  She knows Dax, but he's a mystery (although plenty of rumors circulate around about him).  Predictably, their interactions start off awkwardly but blossom into something else during the term of their incarceration.  So far, so formulaic.  However, West throws in a big twist half-way through and springs the two from the library.  This complicates things as now Autumn must balance her previous infatuation with Jeff with her growing feelings for Dax.  Formula re-established!  There are also issues with Autumn's struggle with anxiety and Dax's reluctance to open up and commit to others.

All in all, fairly predictable and harmless.  There isn't much depth here and we don't really get into anyone's heads.  The adults are especially disposable, but even Autumn herself is a cypher.  A fluffy romance that stays reliably inside of expectations.
Posted by Paul at 9:02 AM