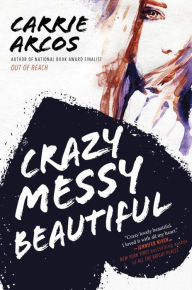 Neruda is named after the Chilean poet Pablo Neruda, but he bears little resemblance to the great poet of love.  Neruda the kid knows that he has no particular talent with words himself (although he is a fledgling artistic talent) and even less luck with girls.  He's tried to get someone to go out with him, but been rejected by all (as the novel begins, he's striking out again with the lovely Autumn Cho).  In his heart, he believes that everyone has a soulmate -- if only he could meet her!  His friends try to encourage him to keep trying but he is beginning to give up hope.

Then a class assignment pairs him up with his surly classroom neighbor Callie and, to Neruda's great surprise, something clicks between them.  In striking contrast to his previous struggles, everything comes easy and Neruda discovers that when love comes around it is entirely different than his prior struggles.  But this is not really a boy-meets-girl story.  Instead, Arcos has written a meditation on the commitment and struggle that exists in nurturing friendship and romance.  Neruda's idealism takes a pretty hard hit as the events around him giving him a hard lesson in the reality of love.

Arcos herself is a pleasant surprise.  Her fairly sparse novel finds many different ways to approach her topic:  not just Neruda and Callie, but also a period of marital discord between Neruda's parents, an effective series of reflections on the poetry and life of Neruda's namesake, and a bittersweet subplot about Neruda's friend (and ex-con) Ezra.  Some parts of the story didn't work for me (the nemesis Luis was a weak link and Neruda's dysgraphia was an underdeveloped idea) but I liked Arcos's originality and her bravery at trying out those new ideas.  And the ending, while completely unexpected, was perfect for the theme of the story.
Posted by Paul at 3:38 PM