Just Another Girl, by Elizabeth Eulberg 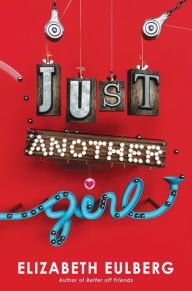 Hope has always assumed that she and Brady (the boy next door) would become a couple and she's long been plotting the perfect moment for them to become official.  So when he falls for new girl Parker instead, Hope is crushed.  It disgusts her having to watch the two love birds, especially since Parker is so perfect and is always rubbing the fact in Hope's face!

But Parker's life is no where as nice as Hope imagines it.  Unbeknownst to Hope, Parker's family has come apart and she and her older sister have to scrape by on their own.  Parker is busy holding down and job and focusing on getting good enough grades to be able to get a scholarship to pay for college.  Parker is jealous of Hope, her perfect family, and carefree life.

Through alternating views, we see how the two girls are so wrapped up in their own woes that they have become blind to what the other is truly like. The idea of seeing the world through the eyes of your nemesis is a nice one, but the presentation was heavy handed.  Parker's issues are so serious and Hope's so trivial that it makes Hope seem shallow.  Granted, she redeems herself in the end, but it's hard to get attached to her.  And there are so many other rough spots:  the girls' BFFs (Lila and Madelyn) are throwaways, the Rube Goldberg Machine Club seemed like a charming subplot but didn't really cohere, and the mysterious disappearing parents (and the adults' response) is left unexplained.  The strangest part of all is the inconsistency between the counterpoising of their town as allegedly too small to keep secrets and the central role of secrets in explaining the misunderstandings.  Passable, but not outstanding.
Posted by Paul at 11:16 AM