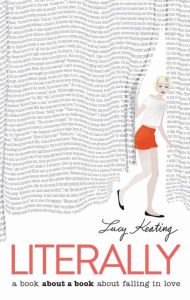 Annabelle's senior year gets thrown off kilter when her parents announce that they are separating and putting the family's house up for sale.  At school, things are complicated.  There's a dreamy hot new boy who is perfect for Annabelle in all sorts of ways, but there's something about him that leaves Annabelle anxious.  Strikingly, she finds herself drawn to her brother's best friend instead.  With both boys interested in her, the result is a classic love triangle.  With all this drama and a number of friends who seem to play just minor bit parts in her life, Annabelle feels like she is a character in a YA book.

Which is when the story takes an unusual twist and the author, Lucy Keating shows up in Annabelle's writing class and tells her that she's only a character in a book!  Annabelle is crushed by this and ultimately resentful at having her family life destroyed in the name of creating a dramatic undercurrent to a novel.  Moreover, she resents Keating's designs to make Annabelle fall for the cute new guy when she doesn't really want to.  So, she decides to fight back!

Writers will often say that the characters write the story and that a well-developed protagonist will point the author in the direction a story should go.  And one of the classic pieces of advice you get in creative writing classes is to allow your creations to speak for themselves.  Keating has simply taken this to its logical (and absurd) conclusion:  a heroine who doesn't like the way the author is telling the story and rebels instead.

It's an impressive gimick which overshadows the rest of the story (which is largely a pretty run-of-the-mill YA romance).  I found the metaphysics of an author and their character in mortal combat to be confusing and muddy at times, but I enjoyed the originality.  Beyond that, there isn't much that this book wants to say.  Authors and aspiring authors will chuckle over a few wisecracks about the genre (e.g., the wasted sidekick, the aversion to bathroom scenes, etc.) and the idea is clever enough to carry the story.
Posted by Paul at 5:02 PM