The Most Dangerous Thing, by Leanne Lieberman 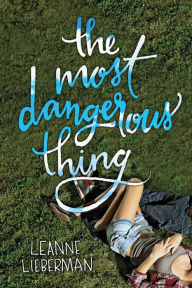 Sydney has been struggling with depression for years and she feels that she finally has gotten the "fog" under control.  But when her lab partner Paul starts to show a romantic interest in her, her fears all return.  The attention is welcome and yet scary at the same.  Her instinct is the run away and hide, but yet she knows that she would like to have a boyfriend.

In the meantime, her sister is trying to stage a production of The Vagina Monologues at school and Syd can't imagine anything more embarrassing.  She understands her sister's fervor and even agrees that girls need to speak out for their rights.  But do they really need to be talking about sex and their girl parts, and using those words?  For Sydney, there is nothing more dangerous than the minefield of sexuality, especially her own.

At times pedantic about sex (and religion to a lesser extent), Lieberman's novel is at its strongest with Sydney herself and with illustrating her struggle with depression.  This is sensitive stuff and handled well, allowing Syd to have wishes and desires, yet feel restrained by all sorts of fears.  I loved the give and take between strength and vulnerability -- how she can be so terrified of Paul at one point, yet willing to come back and fight to overcome those fears.  The story would have been even better if Lieberman had let Sydney tell her story without so many adult voices intervening -- she's smart, interesting, and capable of expressing herself.  I wanted to hear more.
Posted by Paul at 7:37 PM