The Whole Thing Together, by Ann Brashares 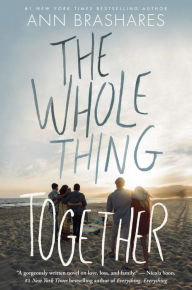 Lila and Robert married and had three daughters together.  After they divorced, each of them remarried and had an additional child each with their second spouse – Sasha and Ray – who were born around the same time.  Now both seventeen, Sasha and Ray share the same half-sisters and even the same room at the beach house on Long Island.

However, the antagonism between their once-joined mother and father keeps them forever separated.  As a result, they have never crossed paths.  But ironically, their shared blood ties link them together nonetheless in an intimate way that borders on incest.  Meanwhile, the artificial (and legally-driven) isolation of the two families – sharing space but never at the same time – obscures scars and wounds that only a tragedy can break open.

Ostensibly not a YA novel, this book gets picked up as such because of Brashares’s Traveling Pants series.  The most YA-ish part is the somewhat touching (but more than a little creepy love story) between Sasha and Ray.  But the novel is really about family and how blood lines and even living arrangements don’t define it.  It’s a moody and lyric work (and a bit hard to track at first, thanks to all of its characters), but a decent heartfelt story about divorce and its aftermath.  It's not a children's book.
Posted by Paul at 8:48 AM