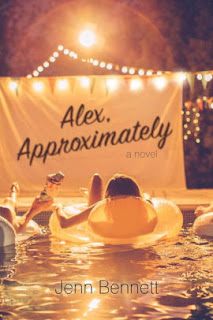 Bailey loves classic movies and shares her passion with an anonymous online friend "Alex." She doesn't know much about him, except where he lives (which happens to be the same California town where her Dad lives).  So, when she ends up moving in with her Dad, she really should give Alex a heads up that she's in the neighborhood.  But she's afraid of what will happen and keeps her move to herself (although she is curious enough that she initially tries to figure out who Alex is by sleuthing around town).

Meanwhile, she settles in to her new home, quickly makes friends, and finds herself alternately attracted and repelled by Porter, the son of a local surfing legend.  Soon, that relationship takes off, placing Bailey in a jam between her former crush on Alex and her burgeoning relationship with Porter.

Now, of course, the identity of "Alex" is pretty easy for a reader to figure out, so it is the one plot point that can't keep the novel together (nor can it be resolved too soon).  Instead, the story is filled out with the usual romantic stuff (featuring a few pretty hot scenes, but otherwise average), some quirky family members, an embittered and unstable bully, and a few unresolved threads (like Bailey's absent mother). Bennett relies on lots of action to keep the story going.  What gets lost in this approach is the human growth story: Bailey's transition from being a conflict-avoiding "artful dodger" to learning to take risks.  It's lost amidst all of the other plotlines and spottily developed.
Posted by Paul at 12:41 PM