Defy the Stars, by Claudia Gray 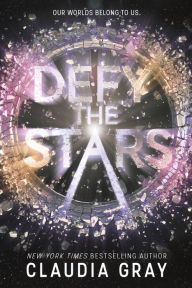 Many centuries in the future, Earth has become an overcrowded and exhausted world, with its people anxious to immigrate to newer worlds. Noemi Vidal is a young soldier training for a desperate suicide run to save her planet Genesis from that invasion. For Noemi, she has nothing left at home anyways, so she is eager to make what little contribution she can make.

But while training for the mission, her group comes under a surprise attack and Noemi ends up on an old wrecked vessel.  There, she comes across an abandoned mech (android) named Abel.  Mechs are a common tools for Earth's people, doing their labor and fighting their wars, but this is not an ordinary soldier or servant.  He's stronger, smarter, and has developed a sense of self that is almost human.

Despite a strong mistrust of each other, the two of them embark on a mission to save Genesis (and maybe Earth as well) that takes them through several universes and adventures.  As one would expect from such a girl-boy set up, there's a relationship brewing as well, but not necessarily with the ending that one expects.  Mostly, their journey takes them to mutual understanding and some personal growth.

Nicely written and lively, the novel doesn't do much downtime.  Whenever one issue is resolved, Gray introduces another one.  There was a lot of potentially interesting stuff to be made out of having a girl with no faith in her future meet a "boy" with lots of future in front of him.

But the human growth story is fairly smothered in the fireworks of sci-fi cliche. All the usual elements are present, from "blasters" to tractor beams to wormholes and star gates to robots acquiring humanity.  It's comfortable ground, but all very formulaic.
Posted by Paul at 11:46 AM