Girl Out of Water, by Laura Silverman 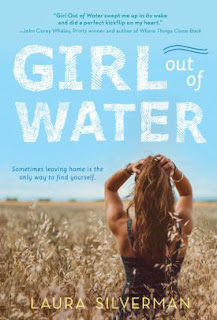 Anise can't imagine living anywhere but with her Dad in their oceanfront house in Santa Cruz, surfing every day, and spending time with her friends.  But things are changing -- one last summer before her friends start to go away to college and beyond.  So, Anise is committed to making the most of this summer.

But then her aunt is in a bad accident and Dad announces that they are going to have to spend the summer at her aunt's house - in Nebraska - to take care of her cousins while her aunt recovers.  There's definitely no surfing in Nebraska!  And worse, no friends either!  She'll miss the whole summer!  Will her friends even remember her when she gets back?

Nebraska, in the end, isn't all that bad.  She spends the summer caring for her cousins and develops a stronger bond with them.  And she meets a handsome one-armed skateboarder named Lincoln with whom she grows close.  But as the summer comes to close, she finds herself torn between her two worlds -- the comfort of the old and the new world she's recently discovered.

The best way to describe my disquiet with this book is to point out that the culminating sequences of the story are told in rushed flashback, as if even the author knew that they would be so dull that she didn't want to spend time with them!  But then, how interesting can it be to have your climax be having your protagonist admit that she's been terrible to her friends all summer, by ignoring them?   Or, in other words, this Santa Cruz world of Anise's was so uninteresting to the author that she barely mentions it for over half of the book.

And the human growth story (about a young women discovering that absence does not have to mean forgetting is simply slipped out there for our approval).  The subplots provide plenty of additional frustrations, including Lincoln's alleged disability, which is played down so far that it serves no actual purpose in the story (Hey! There's this guy and he only has one arm, but you'd never know it because he does everything and we never call it out for any reason).  I understand Silverman's desire to paint disabled people as "normal" but this is really about invisibility.  Anises's cousin and her anger at her mother's injury or Anise's half-hearted searching for her mother also hung out there as unresolved.

In sum, it was light, fluffy, and readable, but really fell apart story-wise for me.
Posted by Paul at 3:57 PM