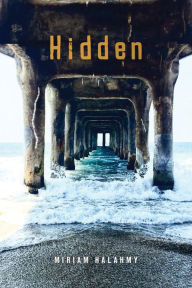 Alix struggles to take care of her Mum and she has plenty of worries, but she can't help but notice the unfair way that some of the kids at school treat Samir.  Samir is a refugee, but to hear the kids talk, you would think he was a terrorist or worse.  She knows that they get such ideas from their parents and Alix wonders if she is the only one who feels that treating people badly because of where they came from is bad.

Then, one evening, walking on the beach with Samir, they find a dying man.  He's delirious and speaking Arabic.  In a split moment, they decide to rescue him and, at Samir's urging, hide him away. Now, they struggle to keep him alive and hidden, while they figure out some way to save him.  But as teens living in a small British coastal town, they don't have many resources.

It's a book with a definite agenda and mission: to raise awareness about the refugee crisis, which is of course quite topical (especially in Europe).  It's a little hard for me to picture Alix being so naive and uninformed about the state of the world, but doing so allows Halahmy to lecture the reader about the situation (I also assume that Halahmy is pitching the situation softly to make it more palatable to adult readers, who may feel the material is inappropriate for children).  As for the story itself, it is lively, but a bit hard to track due to cultural differences (parental, teacher, and even law-enforcement behave strangely in this world).  I found it all a bit odd, but certainly readable.