The Warden's Daughter, by Jerry Spinelli 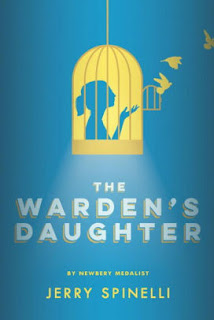 There are two things Cammie is known for – being the the daughter of the warden and being the girl whose mother was killed by a milk truck twelve years ago when Cammie was still a baby.  Now, in the summer of 1957, as Cammie is about to enter Junior High School and become a teenager, Cammie has only one thing on her mind – she wants a mother.  And she knows exactly who she wants:  Eloda – their maid and a convicted felon finishing up her sentence at the jail.

That Eloda doesn’t quite return the interest doesn’t dissuade Cammie from her mission.  But in this summer of Elvis and American Bandstand and Sputnik, Cammie will learn some powerful lessons about love, loss, and serving her time.

An extremely well-written work by an established master (he’s got a Newbery and a Newbery Honor, and he’s the author of Stargirl – one of my all-time faves).  The book has lots of things going for it. Spinelli captures the details of time and place well.  The characters are compelling, although Cammie herself can be hard to like as she makes many mistakes and is so angry.  And the emotional whammy at the end is breathtaking – the sort of climax that takes you completely by surprise.

The story is a bit mature (not in terms of subject matter, but in format and delivery) and one could worry that this is likely to be banished to Book Report Land (like, The Book Thief).  Hopefully, kids will discover it's also a fun story!
Posted by Paul at 12:05 PM