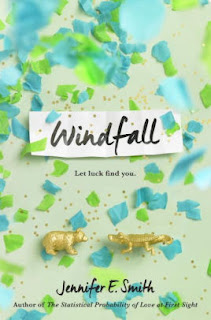 For the eighteenth birthday of her best friend Teddy, Alice decides to buy him a lottery ticket.  Given the hard luck both of them have lived through, neither of them think of it as anything more than a silly joke.  But $141 million later, they are shocked senseless.

Becoming instantly wealthy changes everything and Alice is none too pleased to see how it plays out.  Teddy, unable to come to grips with his windfall, initially fritters it away on toys and trinkets.  Alice, meanwhile, is unwilling to accept any gift he offers, and is afraid she is losing her friend.  In the long run, she may be right.  The money has a way of opening old wounds (from Teddy’s long absent father returning to Alice confronting the loss of her parents nine years before).  Will it destroy their friendship as well?

The premise, while far-fetched, is interesting enough to support the novel.  But I had trouble moving beyond how much I disliked Teddy.  Despite numerous protestations that he won’t change, he seemed perfectly capable of doing so repeatedly.  In fact, I found him to be as unreliable as his gambling-addicted father (probably an intentional resemblance). There’s a lot going on in the story (grieving for the dead, romances falling apart, life choices) and then the lottery stuff on top of it all.  And the ending (a quick pat-it-forward idea) seems so weak, like Smith couldn’t think of a proper way to resolve the story and just slapped this in.
Posted by Paul at 11:18 AM