And We're Off, by Dana Schwartz 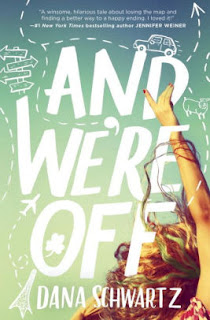 Nora has had some modest success with her fanfic cartoons and she dreams of becoming a professional artist, like her grandfather.  When she is selected to attend a selective art program in Ireland, she feels she is on her way.  And after dealing with her mother’s skepticism and the pain of watching her BFF hook up with her ex-, Nora will be glad to get away.  Her grandfather has agreed to pay her way and is sending her to explore Europe with a series of assignments, each one sealed in an envelope to be opened at an appointed time.  She’ll be completely beautifully alone and independent.

But then her mother makes a last minute decision to come along, claiming that she won't be any bother.  But, as mothers are prone to do, she goes on to completely ruin everything.  Will Nora be able to still explore the world the way she wants, find a cute foreign boy, and develop into a great artist with her mother in tow?  The answer will surprise them both, but the journey is of course the story!

A surprisingly spare tale that is mostly good entertainment. It reads like an entertaining correspondence with a good friend. Schwartz isn’t creating much that is new here (the debt to Maureen Johnson’s Thirteen Blue Envelopes is acknowledged), but she does it well.  And Schwartz even has the wit to acknowledge that life is rarely this easy or simple.  The conflict with the mother is a bit repetitive (the argue over the same things repeatedly) and the conflict with the romantic interest a bit too brief, but for the most part this is a satisfying read.
Posted by Paul at 10:43 AM