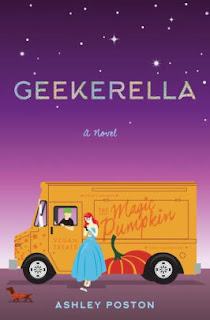 With a nod to Cinderella, Geekerella gives us Elle who lives for her favorite TV show – the long-since cancelled Starfield.  It helps her escape from the hell that is home and forget about her evil stepmother or her spoiled stepsisters.  Starfield was the one thing that Elle shared with her late father.  Her stepmother will stop at nothing to obliterate that legacy.

Darien Freeman is the heartthrob star of soap Seaside and his overbearing manager/father has gotten him the lead role in the Starfield reboot.  But while the fans are disgusted by this cynical commercial ploy (in an attack led by Elle herself on her fan blog), no one knows that Darien is actually a huge fan himself.  Feeling trapped by his inability confess his geekiness to fandom, he starts to secretly text to another fan (who, as it turns out, is Elle).  And the two fall in love over their texts without knowing each other’s true identity.  This culminates at the cosplay ball at a sci-fi con and includes the conniving stepsister, a giant pumpkin for transport, and even a forgotten glass slipper.

In sum, a lot of silly fun.  And I did enjoy the tributes to sci-fi fandom.  But the Cinderella stuff was either too dark or way over the top.  Abusive and nasty, it really clashed with the fun, and it wasn’t very realistic.  Poston doesn’t really do any of the antagonists very well, giving them fairly pathetic justifications for their actions and making them thin and hysterical – more laughable than anything else.
Posted by Paul at 3:09 PM