Grace and the Fever, by Zan Romanoff 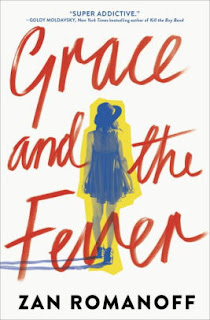 Grace has always considered herself a loser and a nobody at school, but online she's "Gigi" and maintains a super popular blog on Fever Dream, a boy band she's followed for years.  It's a secret obsession that she's hid from her mother and her friends, who would consider the whole thing immature and pointless.

Then, one night by chance she runs into Jes, the lead singer of the band and is mistaken by a paparazzo for being Jes's new romantic interest.  The notoriety pulls her into Fever Dream's world and before she knows it, Grace really is dating Jes...or so it seems to the outside world. But once admitted into the band's life, Grace finds that the reality is quite different from what she had imagined.  The group is falling apart and crumbling under the weight of hiding their private lives from the fans. And if the band realized that Grace and the notorious Gigi are actually one and the same, it would be a disaster for everyone.

A fascinating look at fandom and how fans think and create worlds of their own that feed off of each other, only using the alleged focus of their attention as an excuse to bring them together.  Grace lives in an all-encompassing and consuming world that comes off as even less healthy than the fame-fueled world of her boys.

Grace herself is a major tour-de-force.  Fans (or groupies) don't get a good rep, but Grace is articulate and sharp.  She's invested and emotional enough to prove her devotion, but she's also smart enough and honest about her obsession and her needs.  Even when she's head over heels crazed for the band, she's able to see (and explain to the reader) just why she gets that way in words that are lucid and believable.  I genuinely understood her and what drove her.  And I never imagined that could be possible as our worlds couldn't be any further apart!
Posted by Paul at 10:35 AM