In A Perfect World, by Trish Doller 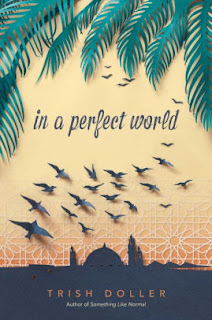 Caroline's mother has always had a dream of doing humanitarian work in a foreign country, but the family had assumed it wouldn’t happen until Caroline had left for college.  But then an opening comes up during Caroline's senior year to set up a clinic in Egypt and Mom decides that they have to seize the opportunity. Caroline knows very little about Egypt beyond that it is old and full of Muslims.  And she's aware and a bit apprehensive about whether Americans will be welcome there.

Moving to a foreign country to actually live there is hard.  Hard to adjust to the climate and the customs and harder still to leave her home and friends behind.  But she discovers a love for her new home, despite its strange people and customs.  A love which is helped in no small amount by a forbidden romance with an Egyptian boy.

The romance was probably a required nod to the genre, but it hangs uncomfortably amidst Doller’s attempt to authentically describe contemporary Egyptian society.  The problem is that there really is no way to plausibly explain the relationship beyond what feels more like wishful Western thinking.  It doesn’t so much detract from the story as simply feel superfluous and alien.

What does stand out is the beauty with which Doller depicts Egypt and its people.  I related to this story as I too have spent time in Egypt as a teenager (albeit a bit young and for a shorter period).  While that was a long time ago and the cultural and political environment has changed, the descriptions feel authentic and Doller’s ability to capture the warmth of Egyptian people is welcome.
Posted by Paul at 9:58 AM