Queens of Geek, by Jen Wilde 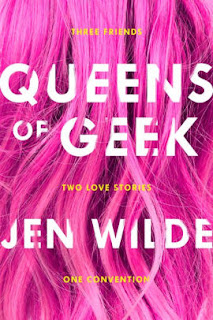 Three Aussies come to the States to attend SupaCon (a.k.a. Comic Con) in Los Angeles.  There’s Charlie who has come to promote her new Zombie flick and is still nursing her wounds from a nasty public break-up six months ago with her co-star Chase.  That process is complicated by Chase’s unexpected and obnoxious presence at the Con.  Charlie would rather move on and make some moves on Alyssa – a hot and rising actress -- but can't tell if the feelings are reciprocated.

Taylor and Jamie are her friends and – as everyone but they can tell – madly infatuated with each other.  Bringing them together is complicated by the fact that Taylor was recently diagnosed with Asperger’s and is very sensitive to being out in public.  Coming to terms with the limits of that condition, she isn't sure that she's up for dealing with her feelings towards Jamie.

Ostensibly a typical romance plot, but with a rainbow cast of characters representing multiple races, sexual orientations, and disabilities.  It’s a PC dream novel (and probably got on my reading list because of a CCBC recommendation), but really it’s a great story where the diversity isn’t the point of the story.  So, if the novel can be used to show that everyone can and does fall in love, then so be it.  But the most important thing is really that it shows good people doing good things.  These are nice people and the ending, while a bit over the top, rewards its characters for their struggles with a satisfying pay-off.
Posted by Paul at 3:18 PM