The Go-Between, by Veronica Chambers 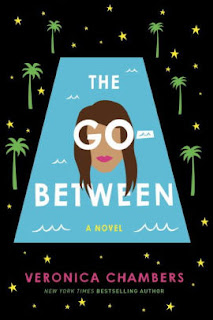 Camilla's mother is a famous telenovela actress in Mexico.  As a result, her family lives a life of privilege.  But for Cammi, it is a lonely life as she has to be protected from the threat of kidnappers and constantly must question the motives of people who want to be her friends.  When Mom lands a role in a new American TV show, Cammi welcomes the chance to move to America and (she hopes) become anonymous.

In Los Angeles, she enrolls at an elite private school and her classmates assume that she's a poor immigrant on a scholarship, with parents who work menial jobs.  This presumption so fascinates Cammi that she goes along with it.  At first, it seems like a dream come true: completely ignorant of her famous mother, Cammi can live a "normal" life. But the racist prejudices of her classmates shock her at the same time.  The lie itself entangles her and she finds herself unable to come clean with her new friends.

It's an ambitious story that tackles a wide list of topics:  immigration, racism, class conflict, as well as a normal dose of romance and interpersonal strife.  Being a short novel (under 200 pages) this is a overly ambitious.  The ending felt particularly rushed as the coming-clean is followed up by a block party and a movie-watching party (neither of which seem to serve any particular purpose except to show the characters having fun).  While many of the subplots suffer, I think the theme of how immigrants grapple with the balancing of old and new worlds is well-explored.  And I particularly enjoyed the early description of Cammi's privileged life in Mexico, as we don't see many stories set in contemporary Mexico that are not set in poor rural areas.
Posted by Paul at 11:44 AM