The Incident on the Bridge, by Laura McNeal 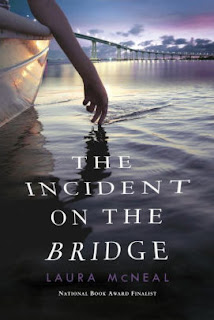 Popular opinion would have it that Thisbe Locke was generally a good kid on her way to a decent college, but then she was led astray by bad boy Clay.  And after the humiliation that Clay subjected her too, she neglected her studies and withdrew.  So, when she disappears one night on the top of a bridge, it is assumed that she's jumped in despair. But the story is more complicated than that.

Told through the voices of nearly a dozen characters, the mystery unfolds in many different directions. And it is that random and chaotic nature of the narrative that I found frustrating.  The book's length is largely based upon misunderstandings and missed cues, and elaborate introductions of subplots and minor characters.  But rather than stitch all of this together, the extremely abrupt ending just closes the mystery without resolving much of anything.  Thus, we spend a tremendous amount of time developing characters and stories which turn out to be inconsequential to the story.
Posted by Paul at 3:58 PM