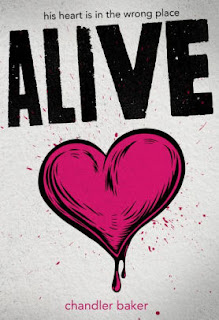 When seventeen year-old Stella receives a much-needed heart transplant, she knows that there will be a long road to recovery. But she is not expecting the strange symptoms that have best her: an intense shooting pain every day at 5:08pm, visions of people around her suffering, and bloody hallucinations.  She’s reluctant to tell her doctors (they will just try to keep her at home and, anyway, they can’t find anything wrong with her), but it is growing harder to get through the day.

Besides, school has gotten interesting.  A sexy new arrival Levi is reciprocating her flirtations.  And while her friends don’t seem to trust him, she can’t help but notice that she feels physically better when he’s around.  She can't explain that, but could it be a bad thing?

Starting off in a fairly realistic vein as a surgery recovery story, I was pretty much on board with the whole romantic interest, jealous friends, and even some of the cat fighting scenes.  But the hallucinations/visions and violent imagery sort of jolted this story off kilter for me.  The fact that all the hallucinations clearly are such, made this part of the story less interesting or coherent.  Honestly, it seemed unnecessary, which is an odd thing to say about a horror novel.  Perhaps, it is wishful thinking on my part (I’m no fan of the genre), but I think we had a pretty good story without the supernatural stuff (which in any case wasn’t convincingly developed).
Posted by Paul at 10:31 AM