I Believe In A Thing Called Love, by Maurene Goo 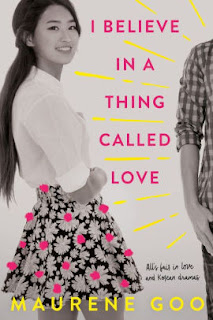 Desi is cursed when it comes to finding a boyfriend -- something embarrassing always seems to happen to her.  And when she meets Luca, it goes no better (in this case, she ends up accidentally flashing him).  But then she figures out the secret to winning in love -- follow the easy steps shown in Korean romantic dramas.

But can love really be created through melodrama and subterfuge?  Desi's determined to find out and, with a focused ambition that has made her the class valedictorian and is potentially sending her to Stanford, she's going to give it a good shot.

I had never heard of a "K-drama" before so I love the idea of building a story around them.  Moreover, the story pays loving tribute to the genre by creating equivalents for all the absurd and over-the-top plot twists that the stories apparently rely upon.

But there's a creepiness to the story when taken at face value.  Desi literally endangers Luca's life on several occasions in order to gain his attention.  And despite Luca's attempt to point out that drama doesn't really relationships, the happy ending makes it clear that Goo thinks he's wrong.  And the author's late claim that Desi isn't defining herself by her ability to snag a boyfriend isn't very convincing.  Her's Dad's reminders that a boyfriend isn't everything is largely lost in the din of the plotting.  The story is intended to be humorous and perhaps it is better to just not read it seriously.