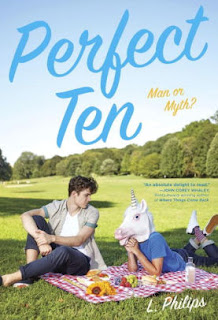 Since he broke up with Landon two years ago, Sam has been single.  Landon's the only other gay boy in his school, so they've stayed friends.  But it's frustrating how slim the pickings are!   When their mutual friend Meg suggests trying out a spell she's researched to create the perfect guy, Sam agrees to go along on a lark.  But he doesn't really believe in magic.

A cute and readable story, albeit without much to teach us beyond the need to be less superficial.  There certainly is room in LGBT kidlit for some vapid romance, so this fills a gap nicely.  The kids are all pretty nice and the pacing is good.

My big complaint is that I didn't find the boys all that authentic -- far more like a girl's fantasy of what gay boys are like (my wife points out to me that there are plenty more male authors out there creating fake depictions of women than this and it's only fair play).  The guys are sweet and sensitive and it's nice that they aren't constantly posturing and talking about their cocks.  But it's not very realistic that they never do and their obsessive concern over each other's feelings is much more of a girl thing.  It could happen, but it's not plausible.
Posted by Paul at 10:48 AM