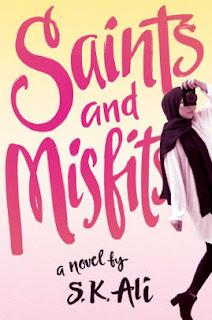 Janna’s world swirls around “saints” (girls who are too good to be true), “misfits” (girls like herself) and the “monster” Farooq (the boy who assaulted her).  And while she’s every bit a contemporary teenager, she knows she can’t out the monster, because he has such a pious reputation in the local Muslim community.  The fact that Janna herself is not a saint (she’s been crushing on a non-Muslim) doesn’t help matters.

The plot is nothing particularly remarkable -- mostly plodding through a few events in Janna's life like an Islamic knowledge competition and a very restrained romantic flirtation.  The conflict with the creepy monster pops up here and there but doesn't dominate (and actually seemed unnecessary to me).

The striking thing about this novel is not the story, but the character of Janna herself.  As a contemporary hajib-wearing American girl, she is a striking protagonist.  It’s far too easy to assume that wearing a hajib (or a more-restrictive naqib) is reactionary and thus the wearer must be as well, but Ali’s book challenges this, showing Janna to be a very normal American adolescent who finds covering her head empowering.  She’s articulate on this point and there is a fascinating aside about whether controlling who can see what is a form of empowerment.  Let's face it, there simply aren’t characters like this in books, let alone YA.  She is intelligent, sympathetic, and friendly – the sort of person you want as a friend – with an utterly normal social life.  Yet still a devout Muslim.

That Ali shows how Muslim teens are normal is another plus of the story.  That they can be so and also be devout is another plus.  And if there’s anything that’s rarer than a positive portrayal of Islam, it’s a positive portrayal of religion in any form.  Here, religion is not a source of conflict but a source of support.  Even the restrictions on her dating choices is approached and handled with sensitivity far beyond the usual adult-child stalemate and hysterics so common in YA.
Posted by Paul at 3:49 PM