The Passion of Dolssa, by Julie Berry 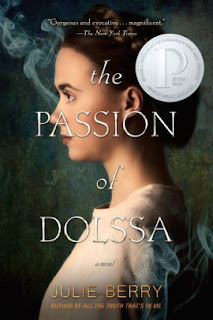 Provence in 1241 is still recovering from being besieged during Innocent III’s crusades.  It is a land wracked by fear of the power of the Church and its Dominican inquisitors.  And it is precisely the wrong place for a young woman named Dolssa to appear, claiming to be in direct communication with Christ and performing miracles wherever she goes.  Sentenced to be burned as a heretic, she escapes and is rescued by three sisters.  They themselves are struggling to get by but grow fond of Dolssa when she heals the youngest sister.  As one would expect, it all ends very badly.

A rich and well-written story.  As one would expect, there is a certain amount of anachronistic modern behavior among the largely independent young women, but it makes for good reading.  Dolssa remains a bit of a cypher, but Botille (the middle of the three sisters) is endearing.  I’m too familiar with the history to feel indignant about the injustices that Barry wants to illuminate, but I imagine that much of this will be new to young readers.  Still, the book’s purpose is to entertain and it certainly performs that function.
Posted by Paul at 10:00 AM