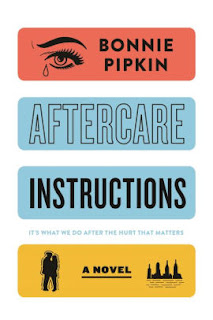 When Genesis emerges from the abortion clinic, she finds that her boyfriend has abandoned her.  And in the days that follow, his avoidance sends Gen over the edge.  Not that he's her only problem.  Back home, her father is dead her Mom can't take care of her.  Adding a horrible boyfriend to the mix shouldn't matter!  Interspersed with flashbacks (told as a script) that cover the start of her relationship, the novel details the week immediately after her procedure as she struggles with the unexpected end of her relationship.

Strikingly, the one thing not discussed in this novel is Genesis's feelings about her pregnancy or its termination.  Beyond a few fleeting references to the procedure itself, Pipkin skips over that subject.  It doesn't seem very realistic, but it's a shrewd move to keep the focus firmly on Genesis's struggles with her self doubt.  That makes her come off as self-centered (an accusation that more than a few of her friends launch against her) and her steady problems with amnesia don't help much either.  She's a hard character to sympathize with.

Furthermore, the story is a mess.  Important plot details (like the boyfriend's feelings about the abortion) are slipped in at inopportune moments.  The subplots (like the mother's depression) struggle to make sense within the rest of the story.  And the script format for the flashbacks is awkward.  Of all of the devices, the convention of juxtaposing aftercare instructions as chapter titles with story developments worked pretty well though.  This is a rough work.
Posted by Paul at 6:22 PM