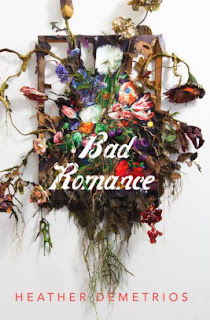 When Grace gets Gavin to notice her after years of crushing on him, she is ecstatic.  Finally, there is a chance for something good in her life. Her home life is horrific.  Her stepfather is abusive to both her and her mother.  And Mom has retreated into a private insanity, taking her anger out directly on Grace.  Somehow, Grace has managed to be a stellar student and kept her focus on graduating and getting out of town, dreaming of going to drama school in New York.  Now, with Gavin in her life, she's hoping the time will go by faster.

At first, Gavin's kindness (and frequent escapes to his supportive family) seem to be providing the escape she was wishing for.  But the relationship sours and slips into a destructive cycle, eerily echoing her mother's own abusive relationship with Grace's stepfather.  Gavin is jealous and paranoid.  He demands that she stay away from her friends and starts spying on her.  Without warning, his mood turns dark and his behavior violent.  And Grace, groomed to take this type of abuse from her stepfather, willingly accepts and embraces the dynamic.  Despite constant efforts by her friends (and even her parents), Grace is unable to pull away.

The result is a harrowing and unrelenting tale of a destructive relationship, which unfortunately rings true.  It takes a special level of dedication (or masochism) from the reader to work through it.  I did so in hopes for redemption in the end.  It comes, but is far too brief and rushed to offer a good pay off for the suffering that we endure along the way.  Instead, the major value of the book in the end is its unflinching portrayal of an abuse.  That has education value but makes for a grueling read.

I'd recommend Sarah Dessen's very similar novel Dreamland over this book -- a novel that is just as devastating, but did a better job at focusing on the psychology of a young women slipping into madness.
Posted by Paul at 11:29 AM