Midnight at the Electric, by Jodi Lynn Anderson 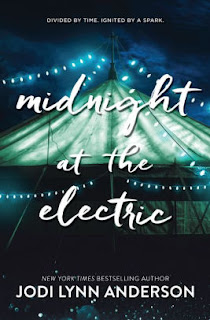 In the year 2065, Adri has been chosen as a candidate to join a team of terraformers on Mars.  It's a one-way mission, but that doesn't bother Adri because she's an orphan with no close family.  But before she leaves the Earth, she must undergo training out in Kansas.  There, she is lodged with a previously-unknown distant relative named Lily who lives all alone in an ancient farmhouse.

Bored out of her mind in the middle of nowhere, Adri explores the house's secrets.  She finds a packet of letters and an old journal that recount a family history that Adri has never heard of, stretching back to the 1920s and 30s.  As the stories of these people from the past unfold, Adri uncovers a complicated tie to the past that Adri has never imagined.

A beautifully written story that ties together the lives of three young women separated by decades. Never actually meeting, they are nonetheless interconnected.  Some of the things that tie them together are concrete (the old house, Galapagos the tortoise) but far more of the stories’ connections are subtle shared traits.  Each of the stories, while authentic to its period, is engrossing in their own right.  Even Adri’s story, which could have easily fallen off a cliff and buried itself in fantasy, is centered on a human element that transcends the down-to-earth vision of the near future.  The result is not really YA and it will appeal to adults as well.
Posted by Paul at 2:25 PM