The Education of Margot Sanchez, by Lilliam Rivera 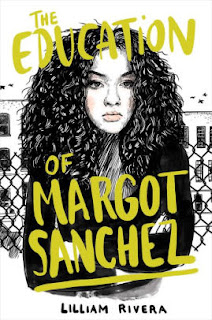 In a misguided attempt to impress her friends, Margot took her father’s credit card and ran up $2600 in charges.  Now, to pay it off, she has to spend the summer working at her family’s grocery store in the Bronx.  She hates the place and everyone there thinks she’s a stuck-up princess (which she sort of is).  But she thinks she can survive the summer (and hide the shame from the girls at school whom she is trying to impress).

But just when she feels like she's working things out, an annoying boy from the neighborhood has a habit of showing up her hypocrisies.  And with everything going on around her, Margot is struggling to keep things together.  The store is missing money.  Her father and her brother are acting weird.  And the neighborhood is changing too – gentrification threatens the community and the family store may not survive.

Sassy and trendy, with a firm grasp on urban argot, Rivera captures the setting well.  But that color aside, she also builds a great story full of vivid characters.  There are so many things going on in the story that people can pretty choose whatever they want.  My own choice was to latch on to the socioeconomic tensions between the rich white world of her Margot's prep school and her family’s roots in the (poorer) world of the South Bronx, and her valiant struggle to bridge that gap.
Posted by Paul at 5:15 PM