What To Say Next, by Julie Buxbaum 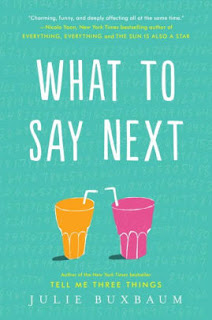 In the aftermath of her father's death, Kit finds her popularity (and the effort it takes to maintain it) exhausting and seeks refuge by hiding out at a lunchroom table occupied solely by social outcast David.  David has trouble communicating with others or reading their expressions, but is something of an expert observer of his classmates, even if none of them will speak to him (making Kit's surprise visit quite a shock).  But to their mutual surprise, the two of them hit it off nicely.  And while David still struggles to communicate and understand others, Kit finds David's honesty refreshing and his social awkwardness liberating.

A romance of sorts between two complete opposites.  Some great pain is expended to explain the plausibility of this odd couple, which in the end kills some of its magic. David is apparently quite handsome and comes from a family of social royalty (his older sister spins in Kit's world). Kit is more open-minded than her peers.

Overall, the two of them do make a great couple.  I ran hot and cold on Kit.  She could be nice and kind at times, but was mostly self-absorbed.  Some of my lukewarm reaction is due to the harsh way she deals with her mother's indiscretions, but in general Kit is self-absorbed and has trouble showing sympathy towards other.  David, on the other hand, is hard not to like.  He puts himself in some pretty awkward situations, but his honesty and kindness shows through.

Certainly, when one can critique a character that is complex enough on paper to have faults and strengths that one can have strong opinions about, something is going right.  I found the plotting and storytelling a bit drawn out (and cared very little about Kit's various micro dramas), but I enjoyed Kit and David enough that I didn't really care what they were doing.  So kudos to Buxbaum for crafting a complicated relationship that is fun to read about.
Posted by Paul at 4:10 PM