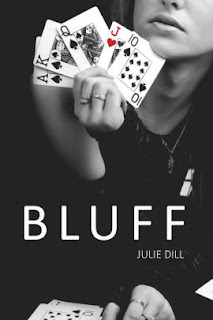 The bills never get paid, no matter how many times Chelsea's Dad promises that he'll get a better job and start making money.  Simply being a teenager in Chelsea's affluent high school is expensive.  Things like cheer squad costs serious money, but when the electricity is getting cut off, Chelsea has to make choices.

That is, until Chelsea stumbles over the idea of gambling as a means to earn cash.  Sneaking into a casino as an underage player is scary, but Chelsea is driven and determined.  She's also talented and discovers that poker is an easy way for her to make serious money.  But what she is doing is illegal and dangerous, and affecting the rest of her life.  As gambling consumes her, she has more and more trouble sorting her life so that no one at school or at home figures out where she spends her nights.

Through fast-paced storytelling, Dill does a good job of showing how Chelsea's skills at the table develop, as well as the growing appeal of the gambling addiction.  In a brief story like this, Chelsea gets most of the attention while the other characters are largely neglected.  The romantic interest never gels and thus seems a bit of a waste.  An interesting subplot about a fellow gambler held similar lost promise. All that said, I really enjoyed the story.  However, I think it is fair to say that the ending is a bit cruel.
Posted by Paul at 11:13 AM