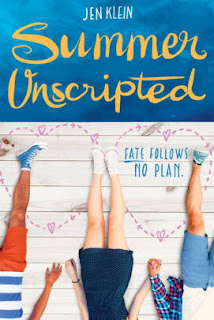 When Rain becomes the recipient of heartthrob actor Tuck’s impassioned monologue, she’s starstruck.  He needs her!  She knows that she has to spend the summer with him, which is going to be difficult because he's away for the summer playing a role in the cast of Zeus! (a musical based loosely on Greek mythology). She knows nothing about the theater at all and spending the summer working musical theater has surprises.

But the biggest surprise of all is finding out that Tuck doesn’t turn out to be quite the pick that she imagined.  Instead, it is moody staff photographer Milo that captures her fancy and takes her to parts unknown.

Pretty silly stuff in all.  And, as Rain’s roommate protests, it’s hard to feel much sympathy for a girl with two cute guys who like her.  The summer stock stuff is fun, of course (especially, if you’ve ever done the work) but there’s not a whole lot else here except the usual escapism.  Light entertainment.
Posted by Paul at 11:33 AM