The Gallery of Unfinished Girls, by Lauren Karcz 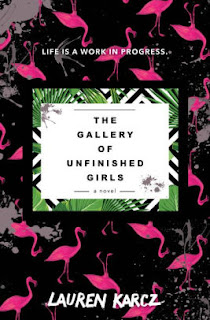 Mercedes’s grandmother is dying back in San Juan and Mom has gone back to care for her, leaving Mercedes and her sister to their own devices.  Mercedes should be working on a follow-up to her hugely successful painting, Food Poisoning #1, but she is stuck in a rut.  At this rate, she'll have nothing to submit for the annual show and her chances of getting into art school are dimming.  But she is simply not able to capture any inspiration and instead endlessly listening to her favorite band The Firing Squad.

But then neighbor Lilia offers to take Mercedes to her own studio, which turns out to be an abandoned apartment building.  It is a magical place.  Seemingly alive, strange things occur, but it is also a place where one can find one’s muse and where Mercedes is able to create amazing works of art.  There’s only one big catch:  the artwork can never leave.  She is faced with a choice:  between living in this space where her art can bloom or denying it all and being stuck outside in the real world.

An odd and dreamy work which explores artistic creativity as a concept through this rather unusual setting.  The studio itself is creepy, but never entirely scary.  And the story never quite commits to being fantasy or horror, just as it never quite commits to realism.  That leaves it in an uncomfortable place.  The pace is slow and dream-like, with most of the action – so to speak – taking place in alternate realities.  It’s hard to know where we are heading.  I found it hard to focus on and missed a few details (having to go back and re-read passages) so that part was frustrating.
Posted by Paul at 12:46 PM